Tech Talk is a series highlighting a member of the Gophermods Family. We presented each of our technicians, managers and employees with a series of questions. These are their answers. Today our guest is Corey Hoeve, an Assistant Manager at Gophermods.

2. What is your Job at Gophermods? 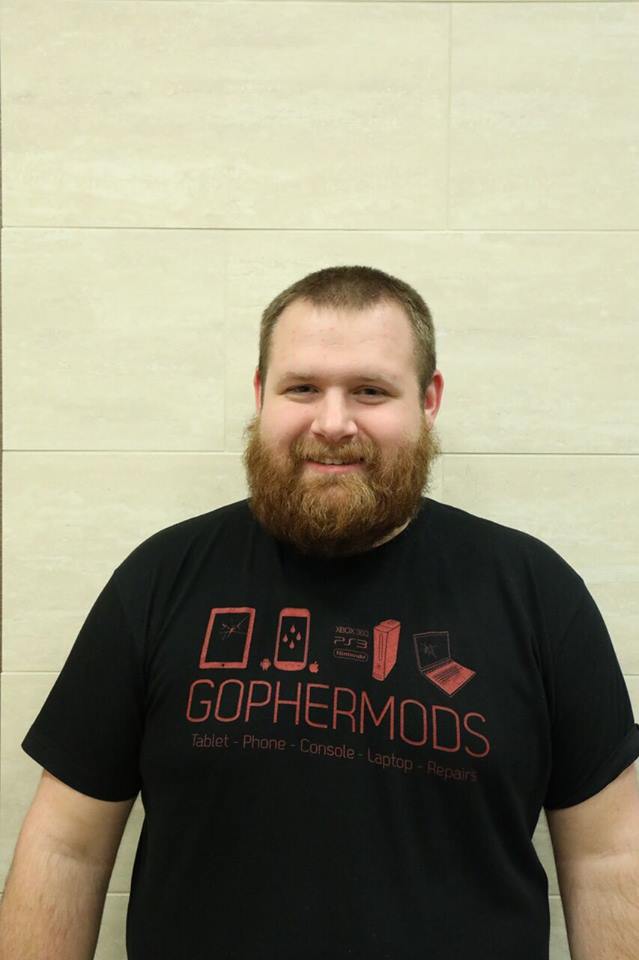 Corey Hoeve is the Assistant Store Manager at Gophermods Plymouth.

3. What is your favorite phone to repair and why?

4. What is the biggest repair challenge you’ve faced?

My biggest challenge has to be the HTC phones. HTCs phones are not very repair friendly at all. They have tons of cables and tape that has to be reassembled just right or things won’t work correctly.

5. What motivated you to be a part of Gophermods?

I wanted to continue working in the tech field but wanted to get away from computer repair. I started out working on computers and slowly transitioned into phone and tablets. Getting tired of computers I looked into Gophermods and got hired shortly after.

6. What is your favorite piece of technology that you own?

My Computer is definitely the favorite piece of tech that I own. I built it myself and have spent many, many hours enjoying it.

7. What is your current phone?

The screen is just the right size for me and it’s very comfortable to hold. The battery is removable and the cameras are amazing. The fingerprint reader is a nice bonus too.

9. After repairing a wide variety of phones, is there one you would consider switching from your current one for?

I really enjoy the Nexus line of phones from Google. I would consider getting the Nexus 5X. You can’t beat that pure Android experience with no carrier or manufacturer bloatware. Plus you can get on Google’s cell network called Project Fi.

10. What is the most bizarre or unusual repair you have ever encountered?

I had an iPhone 6 come in for a screen replacment. When I took it apart the entire screen assembly separated and fell apart (it should not do that). The LCD and the glass should be one piece. However on this one they were separated and held in by a piece of cardboard. On top of that it was missing a lot a screws. When the customer returned she had told me that she had it fixed at a mall kiosk for cheap.. You can never trust a kiosk…

2018-01-22T03:03:42-05:00By Michael H.|
WE ARE OPEN DURING THE STAY-AT-HOME ORDER AS AN ESSENTIAL BUSINESS
Click here to review our protocol developed per CDC Guidelines and for more information on being an Essential Business.