Why you should or shouldn’t upgrade your MacOS

If you’re considering upgrading from your current operating system to the latest macOS, here’s what you need to know about whether or not it’s a good idea. Should You Upgrade to the latest MacOS?

You have a Mac computer. Maybe it’s a Macbook, an iMac, or even a Mac Pro. It’s been a reliable computer and has lasted you a long time.

Now you keep getting notifications that a new software update is available for you. Do you stay on the current version, or do you make the jump to the newest MacOS update?

Today, I’ll be presenting 6 questions to help you decide if it’s the best decision for you. The first 3 will be in favor of upgrading your computer, explaining the benefits and some new features that have been introduced in MacOS.

The last 3 questions will be in favor of staying on the version installed on your computer, talking about feature compatibility, hardware aging, and the potential downsides of newer software on older hardware.

So, why should you upgrade to the latest available version? Why should you upend your comfy MacOS bed and rearrange everything? You have all your files exactly where you want them to be, you know what your app icons look like, and how all of your applications work.

You get the latest security updates, and overall improvements against viruses and malware. With every new system update come new patches, lists and fixes for MacOS’ anti-virus software, called Gatekeeper. Every year new viruses, exploits and vulnerabilities are discovered in MacOS, with the newest versions of MacOS, this ensures you have the latest security fixes for as long as possible.

The latest features can be really great (if you have a computer that can take advantage). In the latest version of MacOS, there is a new feature called Universal Control, which allows you to literally share files from your iPad to your Mac, by simply dragging a file across the screen and dropping it on your other device. So for example, if you have a document you want to save to your iPad from your Mac computer, simply click the document file, and drag it over to your iPad’s screen, and it will be saved! No cables, no special apps needed! Every so often a cool new feature like this is introduced, and can be a major reason for many to upgrade their software.

Starting in MacOS Catalina (2019), Apple added the ability for Mac computers to start running iOS apps, meaning the amounts of programs that you could download on your computer was drastically higher than before. In Catalina, the apps for Reminders, Voice Memos, and other core iOS features were integrated into MacOS, offering better interoperability between your Mac and your iPhone or iPad.

We’ve talked about 3 biggest reasons you would want to upgrade your Mac to the latest version for it. But what should we be aware of?

While new versions mean new apps, and new possibilities, sometimes you have the singular application you’ve really gotten used to that is no longer supported. For example, my photo editing app of choice, Apple Aperture, has not been updated in nearly 4 years, and has since been discontinued. Updating my Macbook to a newer version of MacOS will make my computer incompatible with this photo editing app. Sometimes you just have software that works for you and what you do with it. The hidden cost of free software updates is in the new software you have to purchase. Sometimes, the old version is good enough.

If you have an older Mac computer like me (Mid 2014 Retina Macbook Pro), then a lot of the newer flashier features in MacOS are just not available for your computer. For example, the Universal Control feature that I mentioned, not available for my Macbook. So before you click upgrade, make sure you are aware of what features your computer supports, because it drastically varies between different generations of computers. In fact, my Macbook Pro is no longer even supported officially on MacOS Monterey.

After a few years, your Mac starts to get full of photos, documents, videos and apps. Each one of these pieces of data can slow down your computer. The same thing can happen with new versions of MacOS. These new features, systems, processes, applications and software are all operating on hardware that is not updated. To do every day things, the processor needs to work even harder. The processor I have in my 2014 model Macbook isn’t getting any faster, but the software for a 2020 version of MacOS is often introducing drastic changes. As more and more of the software is optimized for newer processors, and different Mac system architectures, there are more and more incompatibilities with older versions. These differences might result in noticeable system slowdowns, poor battery life, and increased heat output by your computer.

Software updates are constantly being developed, and our computers are always asking for those updates. Being constantly bombarded, being told to update and that it’ll make our lives so much better is just part of living in a tech centric world.

But knowing what to look for, and how to weigh the pros and cons of updating is just as important as knowing what features the new software has. This can equally apply not just to your Mac, but also to your iPhone, iPad or Android device.

The easiest way I can decide to update, is to look at a compatibility list, and see how many generations separate my device from the lowest compatible option. If my computer falls within 1 or 2 spots from the bottom, I would recommend staying put.

But if you are unsure, feel free to stop over at Gophermods, where our experts can help you make an informed decision on your software needs or any MacBook repair. 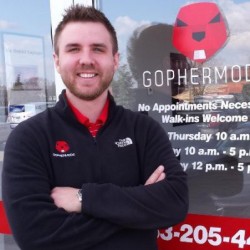 Casey P.
Founded Gophermods in 2010 at the University of Minnesota. Gophermods is a B2B/B2C consumer electronics company with a specialization in the repair of premium computers, smartphones and tablets.