iPhone 14: A Super Smartphone? Or a Super Snorefest?

In case you missed it, Apple just announced the new line of iPhones.

The iPhone 14, iPhone 14 Plus, iPhone 14 Pro and iPhone 14 Pro Max are all here to help you navigate your way through your daily life. The phones have new cameras, processors and more—but is it enough to make them worth the price? 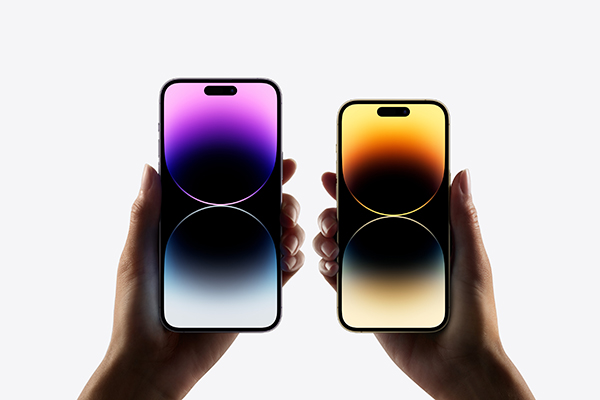 Well, Tim Cook mustered his warmest “Good morning” and greeted us in another flashy spectacle, masterfully paced to create excitement for the new products they were about to unveil.

What we got was….some good but mostly boring updates for the iPhone. New cameras, new processors on SOME phones, goofy names and the death of the mini line.

Big stuff out of the way first

Literally the big stuff. Apple did away with the Mini lineup and brought back the plus line. Now we have the iPhone 14, and 14 Plus, alongside the iPhone 14 Pro and 14 Pro Max.

The 14 and 14 Plus both sport the familiar design established by the iPhone 13 series. Looking nearly indistinguishable apart from the different colors, and size differences, the iPhone 14 can be interpreted more as what the iPhone 4S, 5S or 6S phones used to be: the same design with minor  tweaks and adjustments.

Breaking from tradition with Apple’s year-over-year chip upgrades, and more likely trying to cut costs and cope with the extreme chip shortages, Apple kept the SAME processor as the iPhone 13 series, opting for the year older, but still powerful A15 Bionic chip.

The eSIM lets you change a wireless carrier, data or service plan through software rather than having to swap a physical SIM card. Apple said that major carriers, including T-Mobile, Verizon and AT&T, will provide resources to assist with eSIM-related questions, service upgrades and changes.

Additional Reading: eSIM Technology is Here: What you Need to Know

What Apple is truly banking on, are the personal safety features, and the new larger form factor screen in the iPhone 14 Plus to make a splash. Given the current economic hardships many of us are going through, they are really going to have to incentivize buyers. More on that later.

Much like last year’s iPhone 13 and 13 mini, iPhone 14 and 14 Plus feature a matte metal body with glossy glass on the front and back, a notch in the top for FaceID, a lightning port and two cameras. What changes is that now, the mini 5.4” size is gone, replaced by the larger 6.7” display previously only found on the Pro Max variant.

The bigger changes are saved for the iPhone 14 Pro, and 14 Pro Max. Finally, after nearly 5 years, Apple has replaced the notch in its highest end phone with a pill-shaped cutout it calls *sigh*, the DYNAMIC ISLAND.

From here on out we’ll refer to this as the cutout. Many are hailing this as the best thing that Apple has ever done. While yes it does enhance the look of the phone, what makes it actually something to be interested in is the new user interface elements that are built around it and the hardware underneath.

Apple is leaning into this cutout, by making certain parts of iOS 16 display certain information around the cutout. Apart from that, it did involve the first real redesign of the FaceID module for the first time on the iPhone, featuring under-screen components like the ambient light sensor, and the proximity sensor without additional space needed in the cutout. This can tell us subtly that Apple is going for a notch-less and uninterrupted display design where the entire FaceID module can be hidden underneath the display with no cutouts.

That’s enough about the biggest external change for the iPhone 14 Pro (except for that fetching Deep Purple hue they added).

Now lets talk internals. The two areas where Apple always improves every year are the cameras, and the processor. The processor is boring so we’ll do that first. The A16 Bionic anywhere from 15-25 percent faster than the A15 Bionic depending on the task. Pretty much it when it comes to what you should care about.

In my mind, the biggest change, and the most noticeable one that average users will see is the cameras. For the first time since 2015, Apple has increased the Megapixel count of the main camera.

Now for the iPhone 14 Pro, and 14 Pro Max the main camera comes in at a whopping 48MP. This will lead to increased sharpness in pictures, the ability for lossless zoom (cropping in without losing any sharpness), and with a feature called Pixel Binning, can be used to take better shots in more adverse lighting conditions.

With these new phones comes the price.

We all know that these, really luxury items are being released at a time when people more than ever are financially conscious. Adding insult to injury, entry to the latest iPhone lineup costs $100 more than last year’s 13 lineup, with the mini iPhone lineup being discontinued.

The iPhone 14 lineup is priced as follows:

So what is Apple offering to lessen the financial impact for purchasing these devices?

Well the past 2-3 years, Apple and its carrier partners had a pretty relaxed approach with the condition and functionality of the phones. But the financial crunch is hitting them too.

So the restrictions are back. Gone are the days where you could send in your phone if it had a cracked display glass panel.

No more trade ins with damaged camera lenses, water damage or broken back glass. Apple, and its partners are making cosmetic and practical functionality a requirement.

Gophermods can do these repairs for close to half the cost, with a fit and finish that would meet the requirements for any of these device trade-in incentives, all within a couple of hours and no appointments needed.

Great so now you go to get it fixed, and its all pretty and you go to sign the dotted line at your local carrier store.

Then you see the terms and conditions: 24-36 months of installments.

Previously installments topped out at 24 months (two years). Now the carriers are stretching their dollars even further too, making you stay in the prescribed term no matter how quickly you want to pay off the balance. Contracts are back, they are just called monthly paid installments.

Should you upgrade to the iPhone 14?

I’d expect next year to be drastically different and vastly improved over this year. In the mean time, if you want to upgrade your device to something newer, but without the contract, Gophermods has a wide variety of current generation Certified Pre-Owned iPhones with a one-year warranty including the 13 series, curated by expert staff to help you make the right purchasing decision.